Two dogs were loitering on the side of the yard outside the fence when a group of friends observed them while enjoying a pool party. Some visitors allowed the dogs inside since they looked to want to do so and one of them had a name, allowing them to locate their owners. 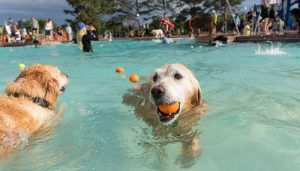 One of the dogs was initially reluctant to enter the yard, while the other dog was eager to participate in the fun. They started approaching people and receiving pets right away because they were so excited to celebrate. 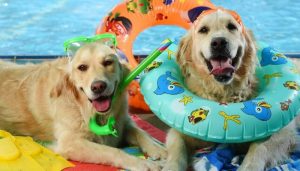 The second dog was somewhat more reluctant; she first remained in the yard, but came over to us when she spotted her friend on the balcony.

The golden retriever that was ultimately found, Stolker, was undoubtedly having a blast. 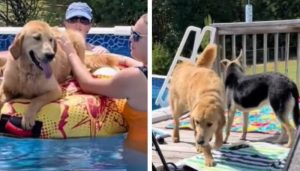 In the midst of the party, Stolcker’s owner discovered him and said that the other dog belonged to his neighbor and that she and Stolcker were best friends.

The nice hosts stressed that the dogs are welcome to return whenever they would like after the canines spent a couple hours at the party before being taken up.